My father-in-law made a tin man for all the kids years ago. A co-worker saw it and wanted one so I decided to make her and I one. I still never got to mine but here are the photos of the tin men.

This is the original one the family each received.

Here are some of my remakes of the tin man. I could only find plastic funnels. It’s a bit challenging painting the face. I made the nose with the tin from the sardine cans. All in all, it is a tedious project but I love the finished design. I am pleased with the outcome.

The white one does bring out the cheek colours better.

I decided to make Toto and he was so much quicker to make.

Plan is a Themed Halloween party with characters from the hotel Transylvania movie.

This Hotel Transylvania light-up sign was a successful DIY project. The challenge will be the costume. I’ll try to share some photos on Halloween.

One of the Butlers

My daughter brought this wingback recliner to me to do something with it. I never did a fully covered chair before. I could tell you this. It is a huge job.

First thing I suggest is to do it in sections because there is sewing involved. Detach the back then the seat.

I decided to start with the ottoman.

There were so many staples to remove on the black cover then under it more. I recovered each piece right away before moving on to the seat.

Another tip I suggest is taking a photo so you know where each piece goes. I made that mistake when I removed the recliner ottoman pieces and didn’t know which side the inner flap went back on.

The wingback and the arms had these spikes that I reused.

The arm of the chair also had spiked clamps, as you can see in the photo above, that get stapled back on then the material folds in and you just hammer it closed. These teeth-like spikes were used because it’s bendable and shapes a nice curve down the front side of the arm. Each piece has to be opened. It’s easy to open using pliers or your thumb. The pliers help straighten each tooth because as you can see I misshaped them from prying them off.

There is sewing involved. Reuse as much as you can. I reused the cording from the old chair because I hadn’t bought any for the chair. All I spent was for new fabric and coat thread. The cheaper the better.

I lined the spikes back in place on the new fabric so that it matched the original then I pinned it in place and set it aside until I was ready to reattach it. Should you do this, make sure that the pins are on the face and not on the inside because you want to leave the pins on until the it’s hammered back on. The pins will keep the fabric in place.

Once I put the fitted part on I put the side covering back. Starting at the top, I stapled it on with a new cardboard strip folded in with the fabric, then hammered the spikes in at the back side. I folded in the fabric on the front stapled spikes and clamped it closed.

Here is the finished look. It is very important that you pay attention to the steps of each piece including any cardboard pieces that might be used because you’ll need to make anything that you damage when removing the old fabric.

*I used cardboard from the back of a large colouring book. It was used on the side and back covering. It gives it a crisp fold.

*You will know where to start when putting back pieces that have additional parts like the spikes because the fabric that was stapled directly to the chair is your starting point.

Recovering a chair is lot of work but worth the change. Here is one I did.

Prying off the old covering was not easy. There were tons of staples and I scratched the frame trying to take the fabric off the back so I had to go over it with stain. I did darken it.

Once the fabric was removed I used it as a guide to cut the new fabric.

I was fortunate the seat came off and I didn’t have to work around the chair frame.

I stapled the fabric back on the back portion of the chair and recovered the seat then secured it with staples and put it back on the chair frame.

For those LEGO enthusiast here is an easy DIY LEGO table project. No more kitchen table mess or stepping on small pieces all over the floor. All the LEGO pieces and creations in one place. No more pulling out the container full of LEGOs then putting them away after. Even the creations can stay on or in the LEGO compartments.

Smallest screws you can get that won’t go through the plywood.

Glue – both wood and craft glue

Moving on to the legs. The legs are notched at 12” high the total height of the board is 14” using the 2×4” board. I put a sinked-in screw hole before putting the legs on the LEGO table top.

Once everything is done you can put the legs on.

Glue the wired burlap cable then use the smallest screws you could find and secure the burlap in the centre and at the ends. It should loop on each ends creating a handle. The plywood can now be lifted and LEGO blocks can be stored under the LEGO mat.

Paint the legs and table.

Lots of room for LEGO blocks!

Another DIY LEGO table in a smaller version. Hope this is helpful to the LEGO enthusiasts OUT THERE!

Buying an end table that measures odd is impossible so I made one to suit my couch.

View video on steps of making an end table.

I decided to do a partly knitted top with fluttered dress length plus a matching bloomer. When making the top, I cut 4 pieces. One set is for the lining. I also cut a knit only for the front of the shirt. I decided to use curtain material I had bought from the fabric store. I start by attaching the lining front to the back lining together. I did the same with the outside but added the knit. I then attach the lining and the outside together at the neck area and down the back opening where the buttons will go. I don’t close the arms until I attach the knit sleeves.

Once the knitted arm is in place and pinned I sew it together. Both the lining and outer part of sleeve is evenly pinned.

I attach the front to the back bloomer, stitching at the sides. I accidentally closed the crotch area then realized I had to take it apart because I had to make bias tape for the elastic around leg. Setting it aside for now. 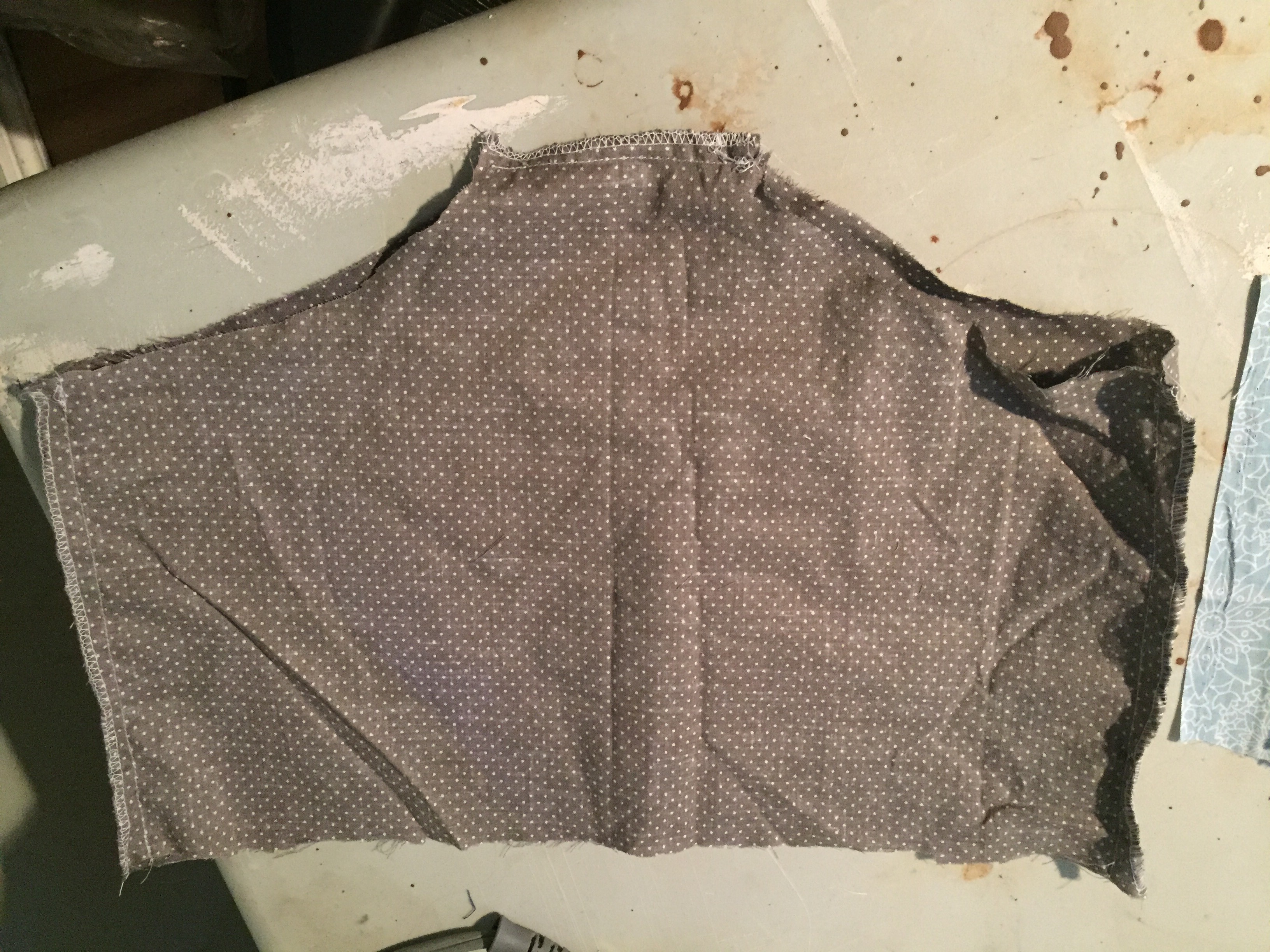 Moving on to the ruffle skirt that will eventually be attached to the shirt, I adjust the tension so that the fabric ruffles as I sew.

I pin each end before I attach it to the top.

Before I can attach the flutter to the top, I need to iron a fold on the top.

The lining also needs to be pressed even to the outside.

This is evenly pressed. 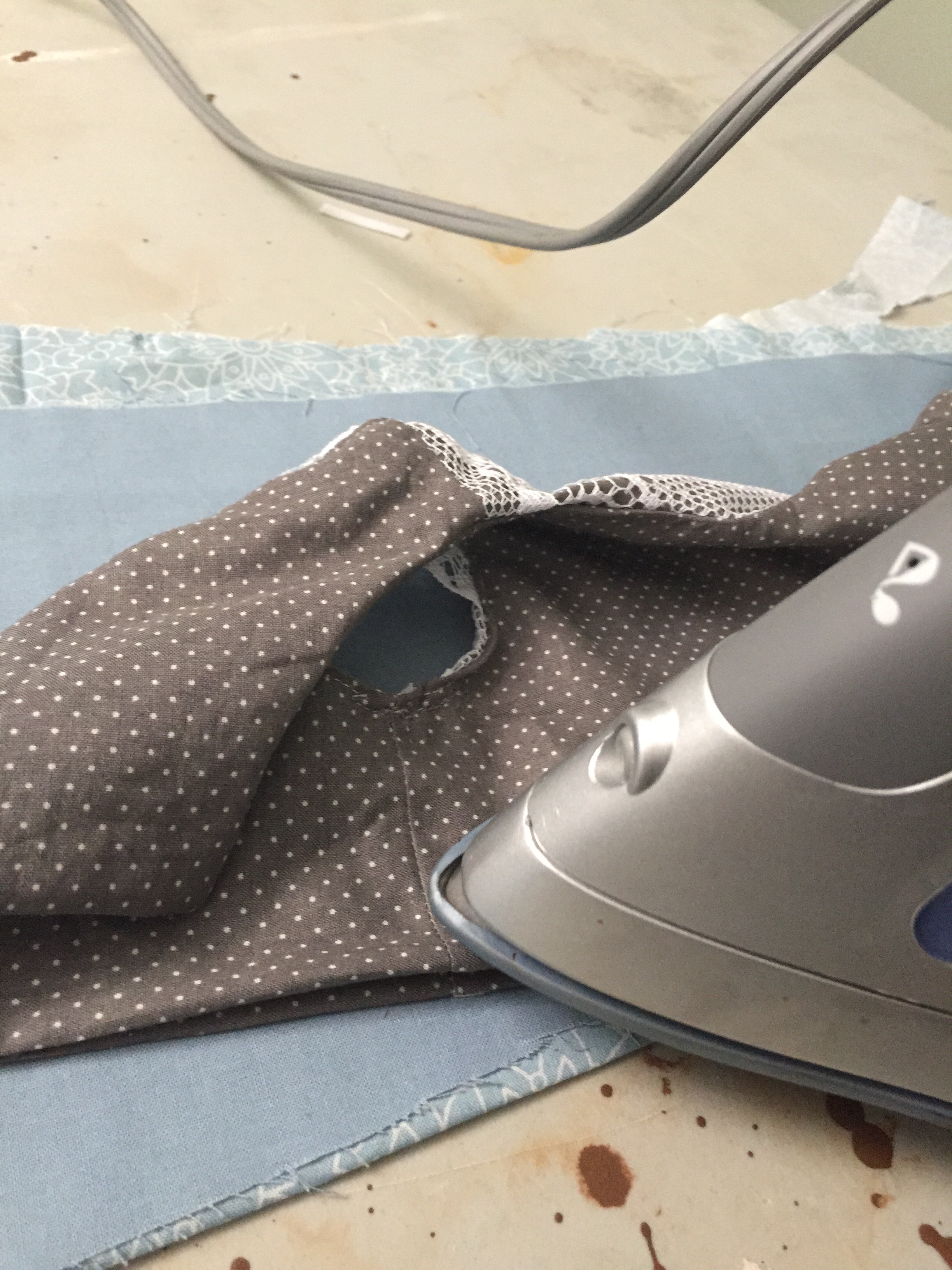 Once pinned, I will sew it along the pinned line.

Pins are removed as I sew. I then sew the skirt closed but stop 3/4 of the way so there is a slit at the back.

The photo of the back of the dress shows the opening from the top extending 1/4 down the fluttered part of the dress. This will give enough room for slipping baby into dress. 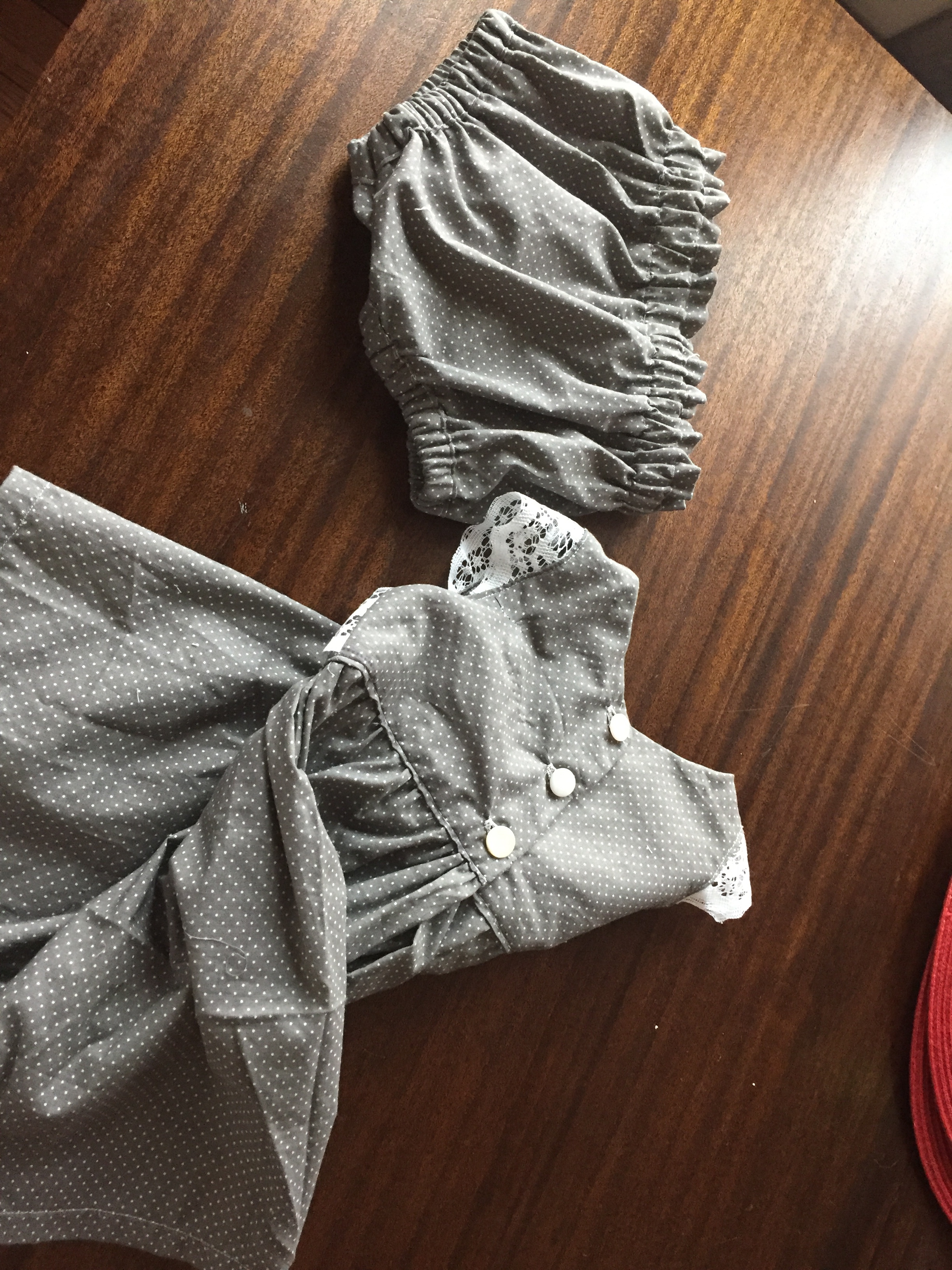 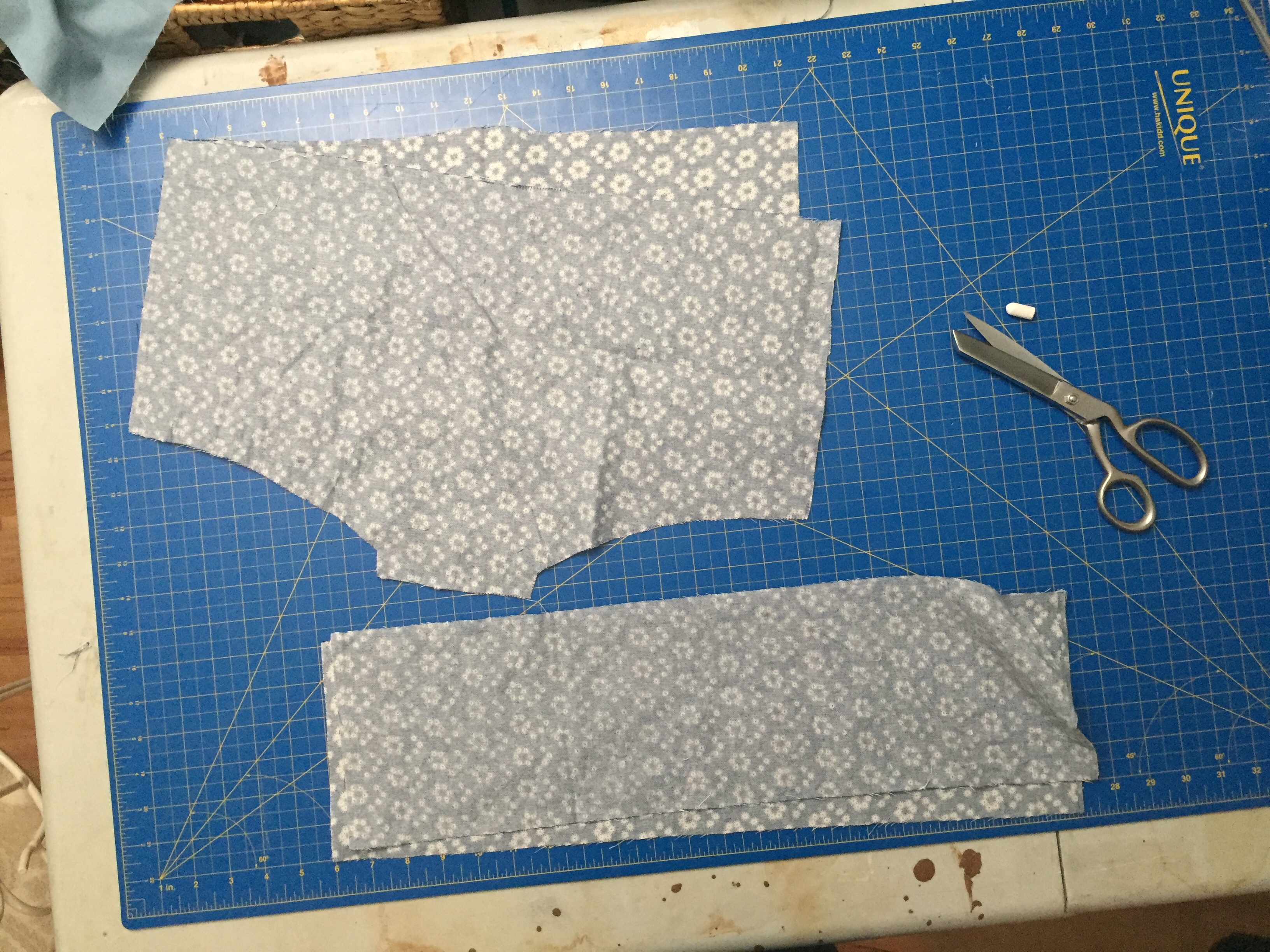 Romper I made. It only took a couple of days to put together.

I always start by cutting out my pattern pieces. Then I put the top pieces together. I had to make bias tape for the cuff.

Then I put the bottom together. The skirt needed to be ruffled a bit before attaching it to the bloomers.

Once done, I attached the top to the bloomer

I added elastic to leg openings.

This was my final outcome. 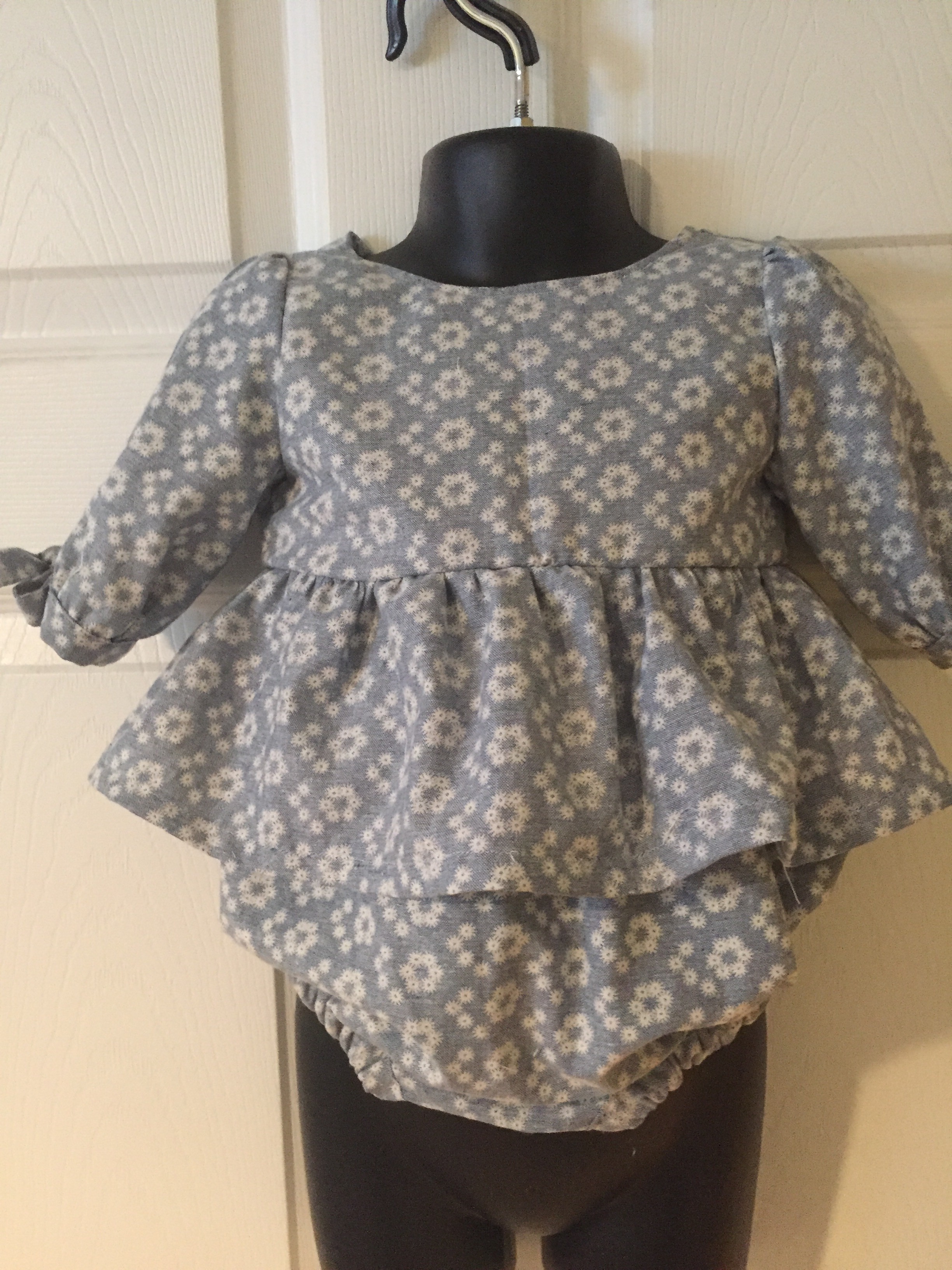 Another time I’ll do full steps if I could put a video together. 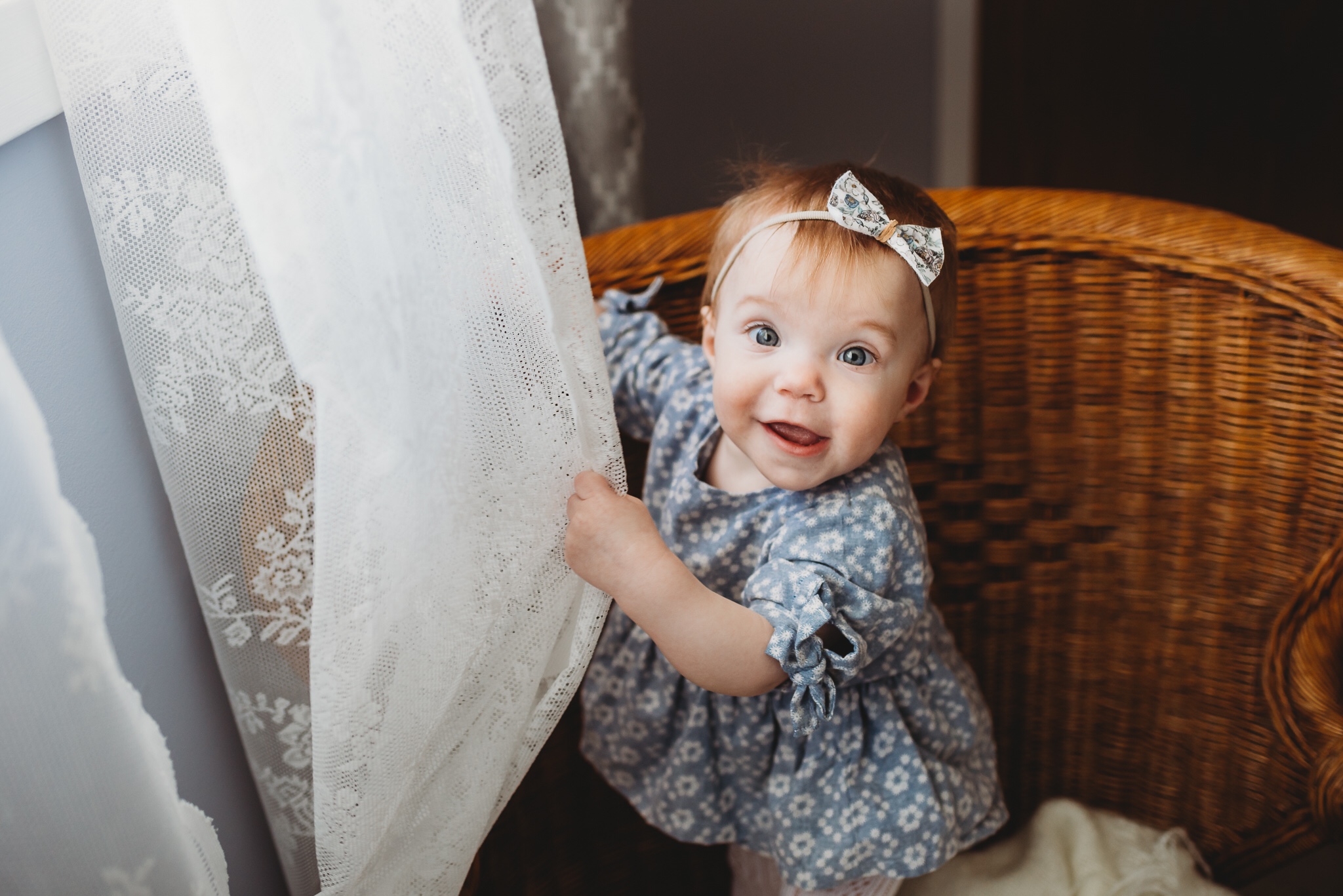 This is what the bunk bed looked like before the change.

The grandkids are over and playing on it. Look how plain it looks.

If you want to learn how to make it, watch the video.

I do like the bunk bed better now that it is wrapped with a skirt on the top and bottom. I also changed the curtains. 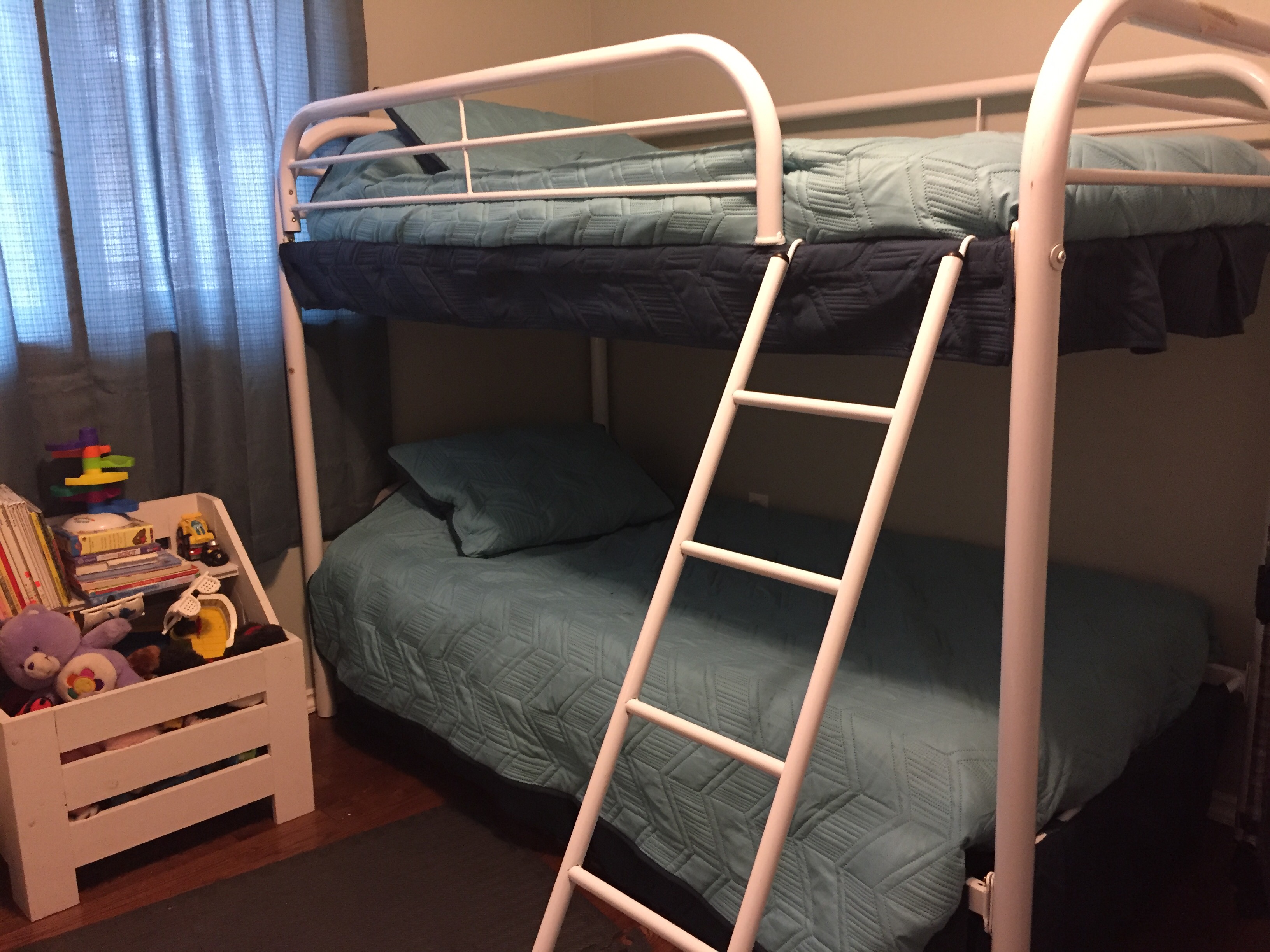